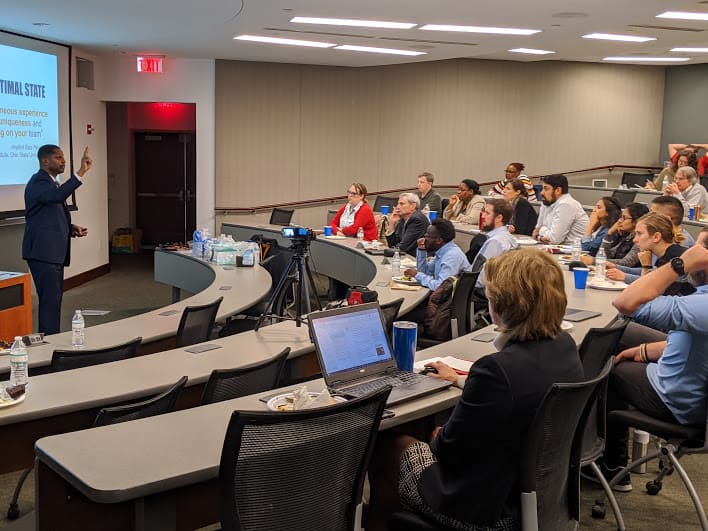 EETI’s a distinguished speaker seminar will be by Dr. Karl Reid, Executive Director of the National Society of Black Engineers (NSBE). The forum will take place Monday, November 18, from 12:30 – 2 PM in Coverdell 175.

In their recent book, “A Whole New Engineer: The Coming Revolution in Engineering Education,” David Goldberg and Mark Somerville state that the keys to engineering education reform are emotional and cultural. This talk links campus climate (culture) and emotional engagement of students, faculty and staff with achievement and motivation. Dr. Reid will make the case for why diversity matters, then distinguishes diversity, equity and inclusion. He will then provide research-based and practical strategies for fostering an inclusive campus climate that spurs academic self-confidence, institutional integration, positive identity development and effective learning strategies for all stakeholders, particularly the most marginalized among us.

Dr. Karl W. Reid was named executive director of the National Society of Black Engineers (NSBE) on June 2, 2014, marking his return to the organization that gave him his first major leadership experience, 32 years earlier. For the past 20 years, he’s been a leading advocate for increasing college access, opportunity and success for low-income and minority youth.

Dr. Reid came to NSBE from the United Negro College Fund (UNCF), where he oversaw new program development, research and capacity building for the organization’s 37 historically black colleges and universities and held the title of senior vice president for research, innovation and

member college engagement. Before his service at UNCF, he worked in positions of progressive responsibility to increase diversity at his alma mater, the Massachusetts Institute of Technology (MIT), which he left as associate dean of undergraduate education and director of the Office of Minority Education. While working at MIT as Director of Engineering Outreach Programs, Dr. Reid earned his Doctor of Education degree at Harvard University. His dissertation explored the interrelationship of race, identity and academic achievement. He is the author of Working Smarter, Not Just Harder: Three Sensible Strategies for Succeeding in College…and Life.

Dr. Reid was born in the Bronx, N.Y., and grew up in Roosevelt, N.Y., a mostly working-class, African- American community on Long Island. The high value his parents placed on education, and his admission to a well-resourced, magnet high school near Roosevelt, put him on a track to follow his older brother to MIT, where he earned his undergraduate and master’s degrees in materials science and engineering and was a Tau Beta Pi Scholar. He credits his membership in the NSBE chapter at MIT with giving a vital boost to his self- confidence and leadership skills. He joined the Society during his freshman year, was elected chapter vice president his junior year and subsequently served as NSBE national chairperson.

After graduating from MIT, Dr. Reid worked in the computer industry for 12 years, in product management, marketing, sales and consulting. In 1991, five years into a successful career in sales and marketing with the IBM Corporation, Dr. Reid read Jonathan Kozol’s “Savage Inequalities,” a seminal book about educational disparities in the U.S., which sparked his passion for bringing about positive change through education of African Americans and other underserved populations.

Dr. Reid is now supporting NSBE’s National Executive Board and the Society’s 24,000 active members in reaching the main goal of NSBE’s 10-year Strategic Plan: to end the underrepresentation of blacks in engineering in the U.S. by annually producing 10,000 black engineers in the country, by 2025.

With more than 500 chapters and nearly 16,000 active members in the U.S. and abroad, the National Society of Black Engineers (NSBE) is one of the largest student-governed organizations based in the United States. NSBE, a 501(c)(3) nonprofit organization founded in 1975, supports and promotes the aspirations of collegiate and pre-collegiate students and technical professionals in engineering and technology.  NSBE’s mission is “to increase the number of culturally responsible Black Engineers who excel academically, succeed professionally and positively impact the community.”